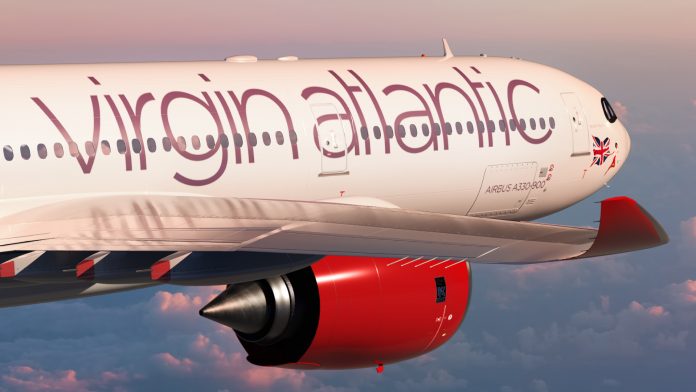 Virgin Atlantic has revealed its hotly anticipated Airbus A330neo for the first time, designed to provide a premium, personalised experience for every single customer.  The airline’s Upper Class cabin boasts a brand new seat, evolution of its iconic social space and the unveiling of The Retreat Suite, the most spacious suite in Virgin Atlantic’s history.

Throughout the aircraft, there will be more ways for customers to stay connected than ever before. Those travelling in Premium and Upper Class can take advantage of game changing in-seat wireless charging, whilst customers in every cabin can enjoy a greater number of USB connections, Bluetooth enabled entertainment systems and the airline’s fastest ever Wi-Fi.

In 2019, Virgin Atlantic became the first UK airline to announce a firm order for up to 16 Airbus A330neos, reaffirming its commitment to flying the cleanest, greenest fleet in the sky.  Following a multi-billion-dollar investment in fleet transformation over the last decade, the airline operates a fleet with the average aircraft age of just under seven years and 68% next generation aircraft. This increases to 100% next generation by the beginning of 2027.  This means Virgin Atlantic’s aircraft are equipped with the most efficient engines and state-of-the-art technology designed to save fuel and reduce emissions. This has so far delivered a 20 per cent reduction in fleet carbon emissions.  Over the next decade, we’ll save another 10 per cent in carbon emissions. The A330-900 neos are designed to be 11 per cent more fuel and carbon efficient than the A330-300 they’re directly replacing and will deliver a 50 per cent reduction in airport noise contour.

Virgin Atlantic’s A330neo is expected to take off to Boston on its first customer flight in early October. Tickets will go on sale later this month. From September 2022, the airline will take delivery of three aircraft, with the remaining deliveries following between 2023 and 2026.

The Retreat Suite is a brand new innovation in Virgin Atlantic’s Upper Class offering and consists of two exclusive suites at the front of the cabin.  The airline’s most spacious suite yet, comprising a 6ft7” direct seat to fully flat bed and a 27” touchscreen with Bluetooth connectivity and wireless charging. With each suite boasting an ottoman that doubles up as an extra seat, up to four people can comfortably dine, chat or play games in their own private social space.  Customers can enjoy an intimate dinner or settle in comfort to watch a film. 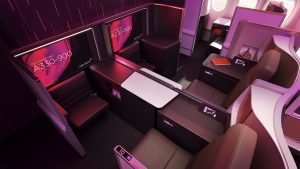 In addition to The Retreat Suite, the A330neo will offer 30 brand new Upper Class suites.  The fully forward-facing suite offers more space and storage alongside a fully closing privacy door. With a ‘do not disturb’ feature.  It has passenger-controlled mood lighting, 17.3” touchscreen TV and even a mirror so customers can check they’re looking runway ready.

The airline’s award-winning social space, The Loft, remains a focal point of the cabin design as customers board the aircraft and is a core part of the Upper Class experience. In an evolution of design from the Airbus A350, it consists of space for eight people, with four comfortable seats, allowing guests to sit and chat or enjoy refreshments from the new self-service fridge and drinks dispenser.  Customers can also connect Bluetooth headphones to the dual panoramic 27” touchscreens or utilise the wireless charging facilities for their devices. 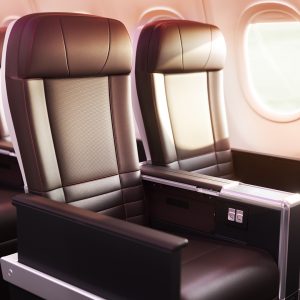 Stylish touches make big differences in Premium, in a cabin consisting of 46 seats on the A330neo.  Virgin Atlantic’s trademark burgundy Premium seats, with a 38” pitch remain, but they’re accompanied by calf rests in every seat and a 13.3” touchscreen with Bluetooth audio.  The airline is also offering its Premium customers an in-seat wireless charging pad. 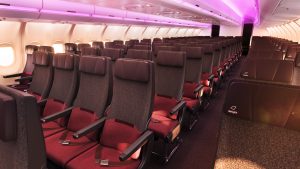 Comfort and connection are order of the day in the new Economy cabin, as customers are set to experience the largest ever economy screen at 13.3”, with an intuitive touchscreen and Bluetooth audio to connect headphones, with customers able to use their phone as a controller.  There’s also plenty of storage, plus AC power and USB ports to keep gadgets energised.  Customers have the choice between 28 Economy Delight seats, which offer an increased 34” seat pitch, or 156 Economy Classic seats, providing a 31” pitch.

“When it comes to innovating for our customers, we never stand still.  Our desire to create memorable experiences means we’ll continue to imagine with fresh ideas. We care about every detail of the cabin design and every step of our customer’s journey. We’re proud to unveil our state of the art A330neo and show the evolution of our customer experience, with each of our customers receiving a premium experience regardless of the cabin they travel in. They’ll be better connected with their fellow travellers and our amazing crew in the air, and with their friends and family on the ground.

“The A330neo plays a significant role in our multi billion dollar fleet transformation, demonstrating our commitment to the planet. We know the most impactful thing we can do as an airline is to fly the cleanest, greenest, youngest fleet possible and the A330neo is integral to achieving this goal. It’s truly a plane for the future.”

Virgin Atlantic was founded by entrepreneur Sir Richard Branson in 1984, with innovation and amazing customer service at its core. In 2021, Virgin Atlantic was voted Britain’s only Global Five Star Airline by APEX for the fifth year running in the Official Airline Ratings. Headquartered in London, it employs 6,500 people worldwide, flying customers to 27 destinations across four continents. Alongside shareholder and Joint Venture partner Delta Air Lines, Virgin Atlantic operates a leading transatlantic network, with onward connections to over 200 cities around the world. On 3 February 2020, Air France-KLM, Delta Air Lines and Virgin Atlantic launched an expanded Joint Venture, offering a comprehensive route network, convenient flight schedules, competitive fares and reciprocal frequent flyer benefits, including the ability to earn and redeem miles across all carriers.

Sustainability remains central to the airline and since September 2019, Virgin Atlantic has welcomed seven brand new Airbus A350-1000 aircraft, helping to transform the fleet into one of the youngest, quietest and most fuel efficient in the sky. By 2022, the airline will operate a streamlined fleet of 38 twin engine aircraft following the retirement of its B747-400s and A340-600s, making its simplified fleet 10% more efficient than before the Covid-19 crisis impacted.  For more information visit www.virginatlantic.com or via