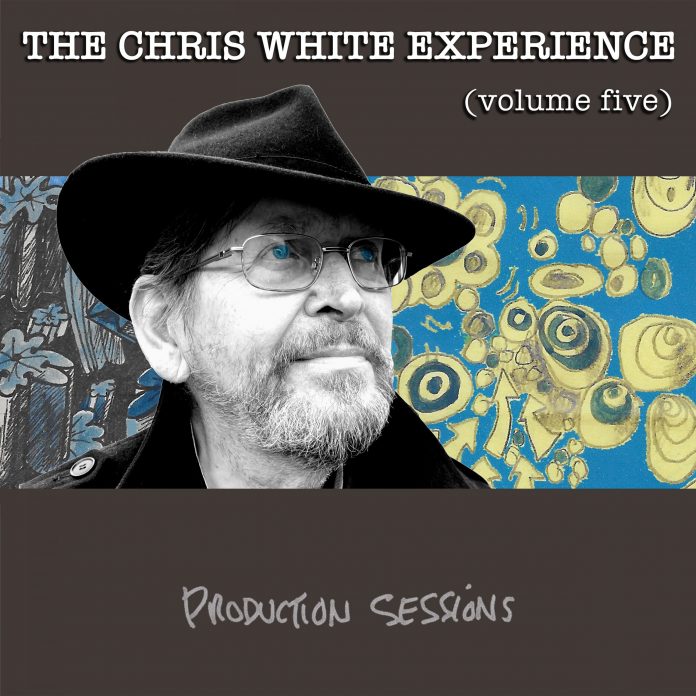 Chris White was inducted into the Rock and Roll Hall of Fame in 2019 as a member of, co-producer, and songwriter for the legendary Zombies. Alongside Rod Argent, Colin Blunstone, Hugh Grundy, and Paul Atkinson, he played on the hits She’s Not There and Time of the Season, co-produced the seminal Odessey & Oracle and wrote the
standard This Will Be Our Year.

The Chris White Experience is a wonderful collection of unreleased and lost recordings from over the last 50 years. After the Zombies, Chris wrote and co-produced the worldwide hit Hold Your Head Up for Argent, produced three albums for Colin Blunstone, worked on countless sessions with diverse artists (Doris Troy, Michael Fennelly, Dire Straits, Charlie Dore), and continued to write and record his own catalogue of material. The popularity of his songwriting has been celebrated by many artists releasing music today (Foo Fighters, Tom Petty, Portugal. The Man). Volume Five of The Chris White Experience celebrates productions, collaborations, and hidden gems, detailing his work as a songwriter and producer from 1968 onwards.

On this album, Brian Cullman makes use of Mark Knopfler, Rod Argent, and Colin Blunstone on Safety. When I Was All Alone sees Colin Blunstone with his Journey era line-up on this previously unreleased Paul Williams number. Pete Brown and Ian Lynn work together on Friends From a Distance, an ideal song for Covid times. Duffy Power’s Love Song features a beautiful Rod Argent piano solo and Danny Thompson on double bass. Each track showcases a host of the finest musicians and the incredible collective talents, the majority of which have never been heard before. Following on from the celebrated Volumes 1-4, it is a brilliant and vital document in the history of British music and analogue recording. The Chris White Experience – Volume Five features 12 tracks showcasing his considerable production catalogue, with so much more to discover.

We decided to do a quickfire Q&A…

What inspired you to get into music?
I was a teenager during the exciting burst of skiffle, and then rock and roll bands, in the UK. Buddy Holly, Elvis, Bill Haley, and The Everly Brothers had such an effect on us youths and I wanted to be part of it.

How would you describe your music?
Genuine.

What would you say is your recording and songwriting style?
Mostly popular, which varies according to taste. The most important thing is to be true to your writing, and put your energy into something you believe in. Don’t follow fashion.

Where would you like to see your music career in 5 years time?
I’d like to still be alive and making music.

Where can music fans listen your music?
All over the internet, but I would recommend trying https://www.thechriswhiteexperience.com/

Dar.Ra is a Music Writer, Producer, and Author who earned his stripes with hits for EMI and 21St Century Artists set up the Kusha...
Read more
Music

Link&Chain prove they are ready with new single…

A unique and smart boutique hotel choice that offers a private paradise for sixteen guests are leading the way in terms of expert santisation...
Read more

Dar.Ra is a Music Writer, Producer, and Author who earned his stripes with hits for EMI and 21St Century Artists set up the Kusha...
Read more
Music

Link&Chain prove they are ready with new single…

A unique and smart boutique hotel choice that offers a private paradise for sixteen guests are leading the way in terms of expert santisation...
Read more
Music

Margarita Shamrakov steps up the pace with new music..

Margarita Shamrakov’s journey so far has included an assortment of world travels have brought her to this point. Her music which can be found on...
Read more
Consumer News

Innovative business solutions provider, What, announce the launch of their user-friendly Platform as an online marketplace to connect local businesses with their target audience. What...
Read more
Load more